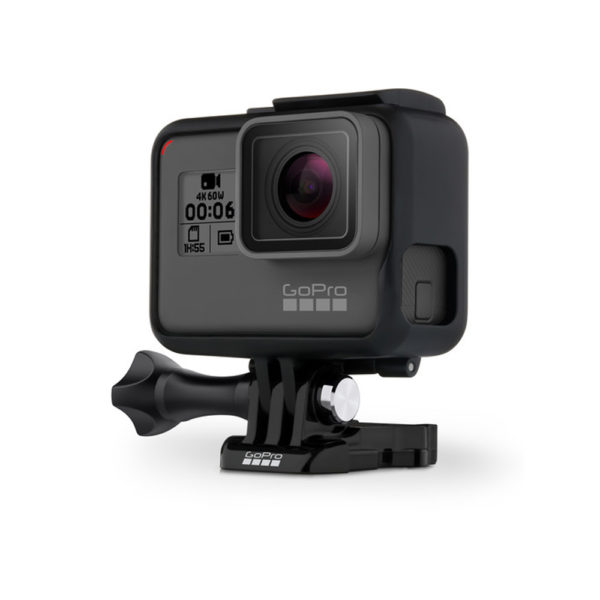 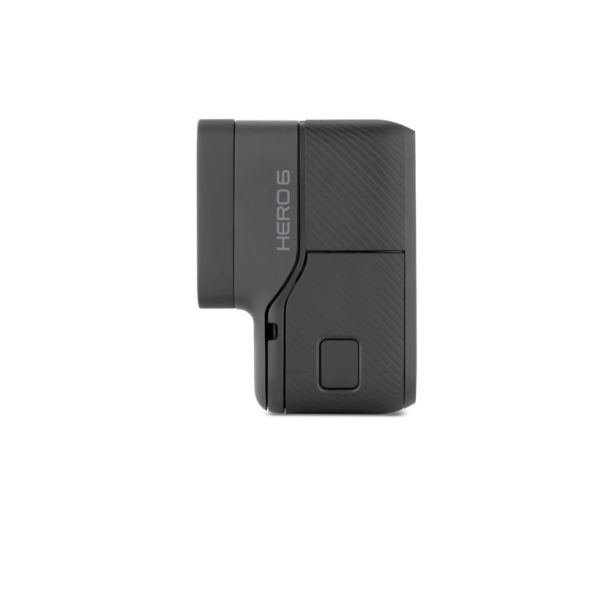 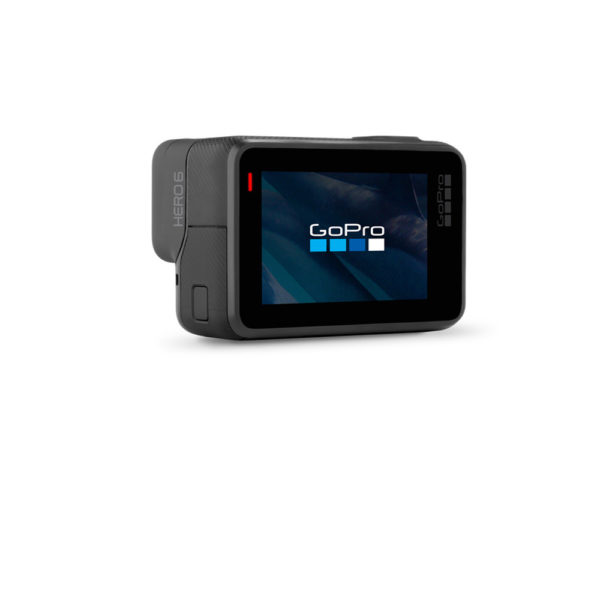 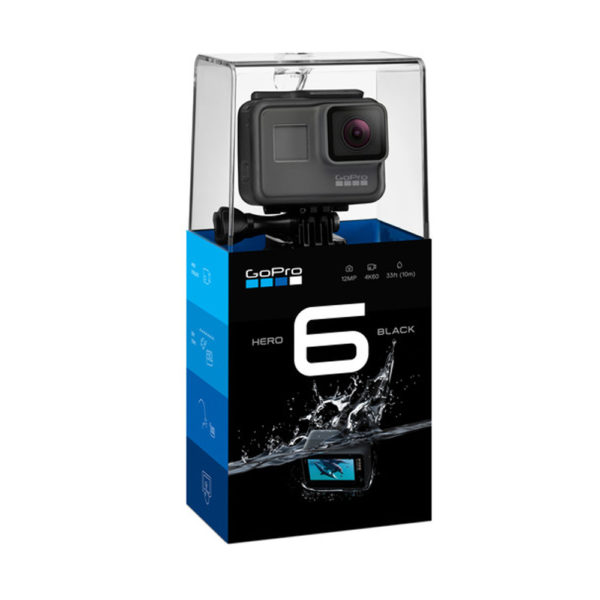 Built on the existing form-factor of the HERO5 Black, the GoPro HERO6 Black action camera provides more processing power than the preceding model, while keeping to a familiar design. The optimized GP1 processor brings higher frame rates in 4K, 2.7K, and 1080p HD resolutions. Where previous models maxed out at 30 fps in 4K, the HERO6 Black can muster 60 fps for rendering smooth motion or even slow motion in timelines with slower frame rates. Other processor-intensive tasks, such as image stabilization, have also been improved in the HERO6.

Like the HERO5 Black before it, the HERO6 Black’s rugged, rubberized, adventure-ready exterior is resistant to the elements and waterproof to 33′ without a housing. Those with a penchant for diving can go deeper still with the separately available Super Suit housing. What would a GoPro be without mounting options? For starters, the Frame, which features the GoPro standard 2-prong accessory interface, is included along with a mounting buckle quick-release for The Frame and two adhesive mounts (one curved and one straight). Other accessories such as handlebar mounts, selfie sticks, and suction cups, for creative placement of the HERO6 Black are available separately.

The rear side of the camera is dominated by a 2″ touchscreen LCD for quickly navigating menus. Once your settings are locked in, the classic one-button interface can take over for quickly starting and stopping recording and changing settings on-the-fly. If your hands are occupied, simple voice commands can start and stop recording, take a photo, or burst of photos, and more.

Select the desired resolution to fit your project. Record in UHD 4K resolution up to 60 fps or switch to lower resolutions such as 1080p and 720p for access to higher frame rates, more FOV (Field of View) options, and electronic stabilization. In 2.7K widescreen and lower resolutions, for instance, narrower FOV options open up, including Medium, Narrow, and the new Linear mode (only available in 2.7K and 1080p settings), which corrects the lens’s barrel distortion.

All video recording modes can be as simple or advanced as you want them to be. If you only want to ensure that a shot is captured, auto-exposure is at your disposal. For those who are shooting less off-the-cuff footage and want complete control, manual control of exposure is also available.

Audio for video is recorded using three microphones. In normal conditions, the HERO6 Black will process the audio for a stereo signal. If high winds start affecting the audio, the HERO6 Black can intuit which microphone is picking up the best sound and automatically switch to that microphone in real-time to filter out any excess wind noise. While the audio will only be in mono, you will know that you’re getting the highest possible audio quality.

WDR Mode: Bridging the gap between JPEG capture and raw, the WDR (Wide Dynamic Range) mode is also available. If the scene has dark shadows and bright highlights, WDR mode will retain better detail in those areas.

Burst Mode: Bursts of photos can be taken during high-action sequences to ensure that you capture the moment. The camera’s buffer can fit up to 30 photos from a single burst, and burst durations can be set from six seconds to one second, effectively offering a 30 fps burst of 12MP photos.

Time-Lapse Mode: Record clouds floating by, traffic snaking through cityscapes, or stars and constellations tracing their way across the sky with the time-lapse mode. Set your interval from a picture every 1/2 second to every minute for different effects.

GoPro and Quik apps allow you to access and edit your GoPro footage with simple to use yet powerful functions. Quik Stories combines the functionality of both apps, automatically downloading GoPro footage from your HERO6 and composing an easily shareable montage of your adventures on-the-spot. The HERO6 Black is the first HERO with 5 GHz Wi-Fi connectivity, for faster video transfer times compared to 2.4 GHz available on previous models.

GoPro (iOS/Android)
Use your iOS or Android device to live-preview and play back shots, control your GoPro, and share on the fly.
– Live preview makes it easy to frame the perfect shot
– Get full remote control of all camera functions
– Share photos and videos to Instagram, Facebook, Twitter and more

GoPro Quik (iOS/Android)
Edit videos with just a few taps.
– Analyze your photos and video clips to find great moments
– Adds transitions and effects, and sync everything to the beat of the music
– Customize your story with text, filters, music, and more

GoPro Quik | Desktop (Mac/Windows)
Import and edit your videos with just a few clicks.
– Transform your footage into edited videos synced to music
– Automatically import your photos and videos and share your best shots
– Comes bundled with GoPro Studio for more advanced editing 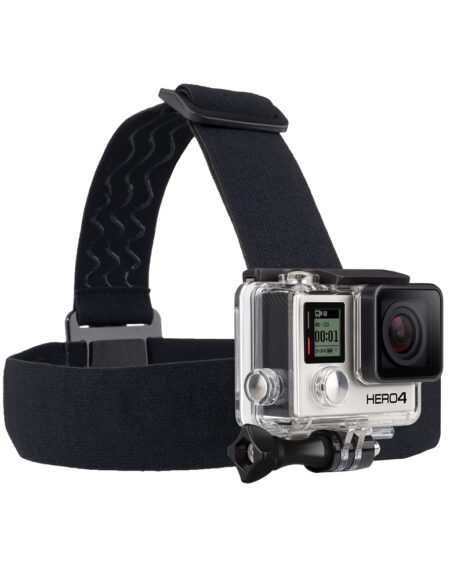 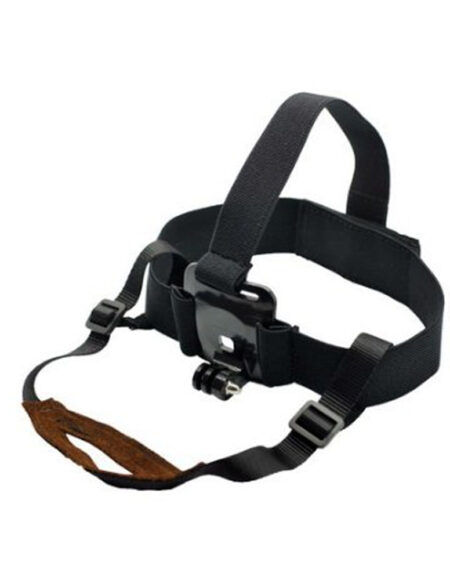 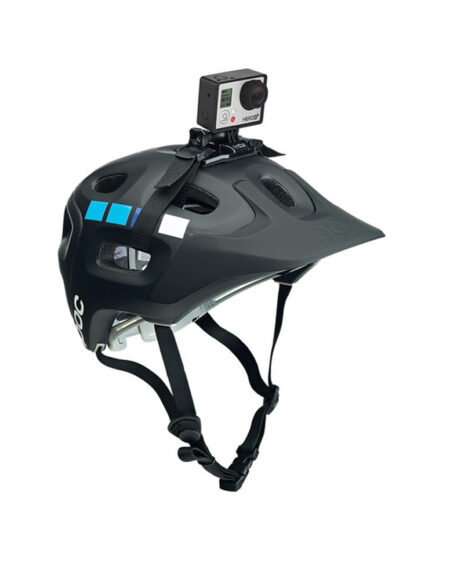 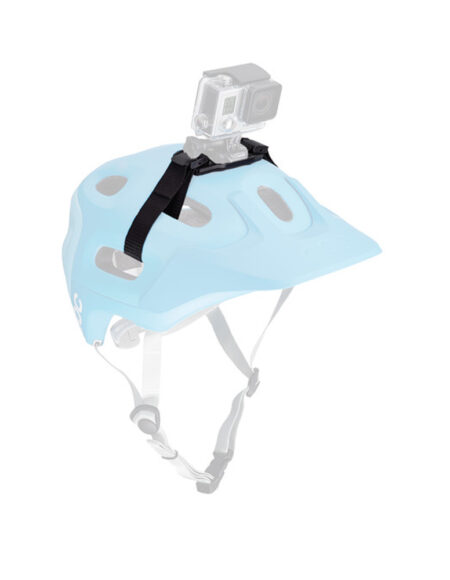 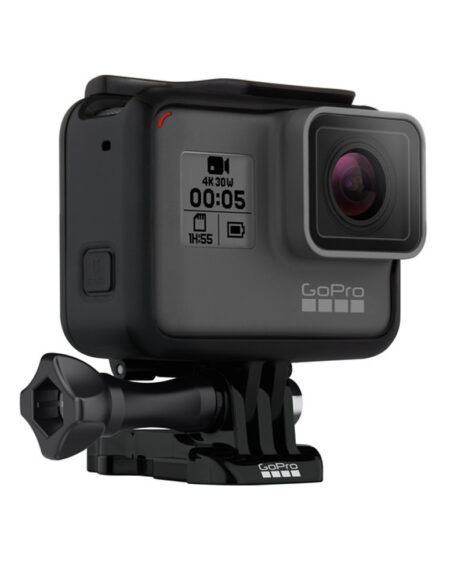 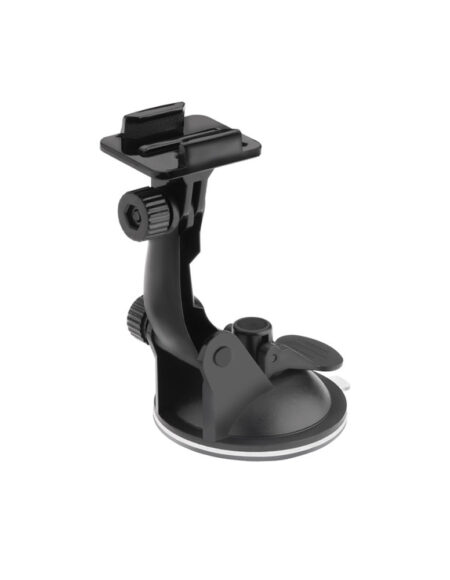