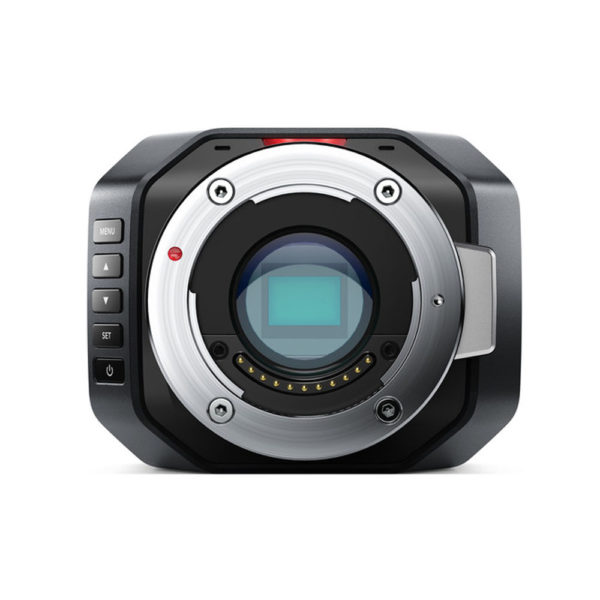 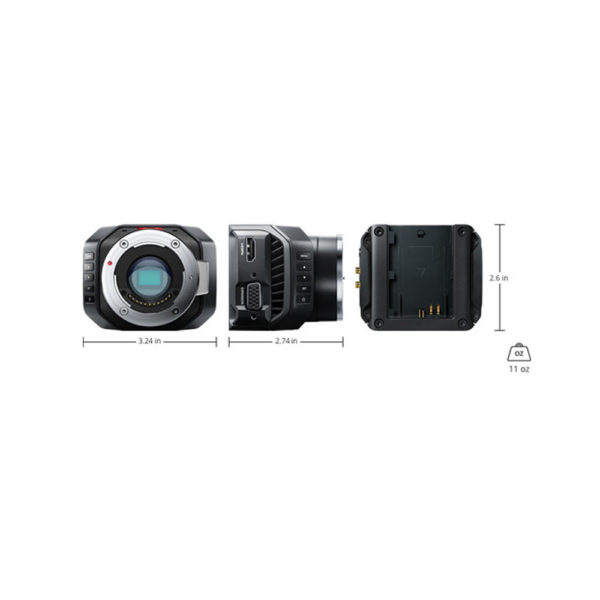 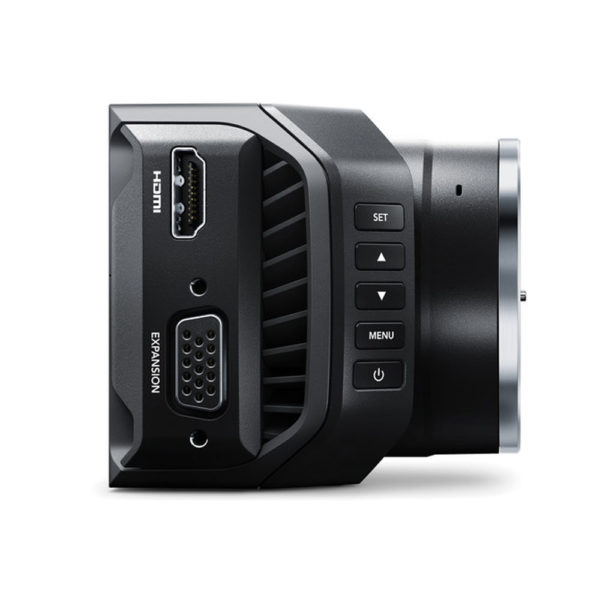 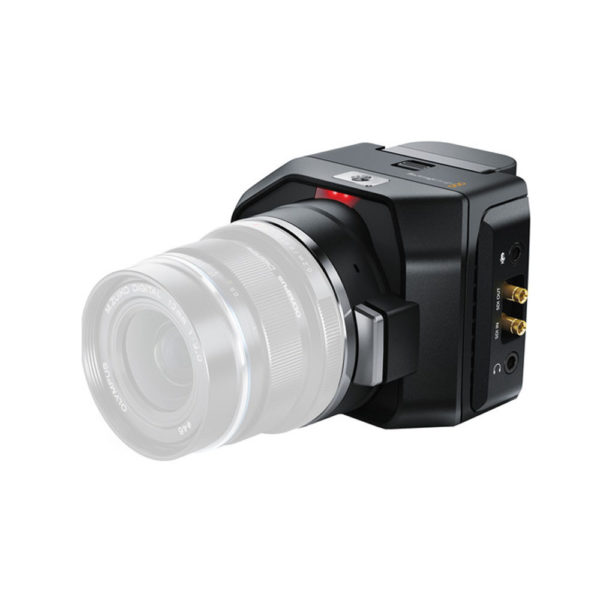 The Blackmagic Micro Studio Camera 4K is a compact Ultra HD camera designed for live productions. It features the same image sensor found in Blackmagic’s Studio Camera 4K, which supports 3840 x 2160p video up to 30 fps and 1080p video up to 60 fps. The camera is equipped with an active MFT mount that can accept native MFT lens or be adapted to a wide range of other modern and vintage lenses, including B4 lenses. It outputs 10-bit 4:2:2 video via 6G-SDI and can be remotely controlled from an ATEM switcher using SDI control protocol. The camera packs many professional studio features into a compact form factor, including a built-in color corrector, talkback, tally indicator, PTZ control output, and B4 lens control output.

Compact in size, the Micro Studio Camera 4K is similar in size and shape to an action camera, making it easy to hide on set or mount in places or on rigs where a larger camera can’t fit. It is equipped with a unique expansion port, which expands the camera’s connections through an included breakout cable. The breakout cable offers connections such as a PTZ serial output for use with motorized heads, B4 data link output for controlling broadcast lenses. It also includes DC power input, LANC control, and genlock reference input. Additional connectors found on the camera body itself include an HDMI monitor output and 3.5mm audio input. The camera is powered using an included AC power adapter. It can also be powered for up to 70 minutes by attaching an optional Canon LP-E6 type battery to the back of the camera.

The Blackmagic Micro Studio Camera 4K is engineered with a durable magnesium alloy core in a body that’s not much larger than the lens mount itself. The small size of the Micro Studio Camera 4K makes it ideal for a wide range of live productions. It can be hidden just about anywhere on set, giving you the ability to have more camera angles than ever before so you can create a more interesting program. You can even hide them on stage to get shots of live performances or fly them overhead on rigs during sporting events. It can also be used in the studio by rigging it with a professional broadcast lens and an optional Blackmagic Video Assist for monitoring.

The Blackmagic Micro Studio Camera 4K features an active Micro Four Thirds lens mount let you take advantage of the wide-range of compact MFT prime and zoom lenses. They can be remotely controlled using the return SDI program feed from your ATEM switcher or from the expansion port on the camera. You can also add optional third party lens mount adapters a wide range of modern and vintage lenses, including broadcast B4 lenses.

The camera features an expansion port that offers multiple control connections using the included expansion cable, such as a PTZ serial output connection so you can use motorized heads and a B4 data link output for controlling broadcast lenses. You can even build customized camera control solutions using the S.Bus input. The expansion connector uses a common DB-HD15 connector so an experienced user can make their own cables. The expansion port also includes DC camera power in, LANC, and reference input.

The Blackmagic Micro Studio Camera 4K works with standard SDI camera control protocols, which means that you can connect the program feed from any model of ATEM switcher to the camera’s SDI input and remotely control any setting in the camera, color correct, or even change focus, iris, and zoom on supported lenses. Broadcast cameras traditionally have basic CCU color balance controls, however the Micro Studio Camera 4K includes a full DaVinci primary color corrector so you get so much more than simple CCU controls because you can also do a full color grade in the camera.

The Micro Studio Camera 4K includes a full-size HDMI connector so you can add a monitor to the camera or quickly plug in a local monitor when you’re setting the position of a remote camera or changing camera menus. There is a mini BNC connector for the main camera 6G-SDI output and a mini BNC connector for the 6G-SDI camera program input which can be used to provide reference, control camera CCU settings, return talkback audio, and tally status. There is a 3.5mm mic input for external microphones and a 3.5mm headphone socket that supports an iPhone compatible mic so you can use it for talkback.

The built-in stereo microphones are engineered for high-quality audio and feature a mechanical design that helps reduce unwanted wind noise so you get great sounding audio. When you need better audio in windy outdoor conditions such as sporting events, you can plug in an external mic with a wind screen to the 3.5mm stero mini jack to capture cleaner sound. The camera instantly switches to the external microphone when one is connected and works with both line or mic levels.

The Micro Studio Camera 4K includes an iPhone-style headphone socket with mic so you get full talkback support. You can also use standard noise canceling headsets, like those from Bose, Sennheiser, and more, to hear the technical director without distraction from the audience. Because the camera has an SDI connection to the switcher and an SDI connection from the switcher, the talkback audio is embedded into channels 15 and 16 of the SDI signal and you get two way communication. If you’re setting up fixed cameras, talkback makes it easy to walk from camera to camera and plug in your headset to communicate with the rest of the crew to get the best angles and framing.

The camera includes a 12V to 30V DC power input so you can power the camera using any standard power supply, such as the included AC power adapter. There is a also standard Canon LP-E6 type battery receptacle on the back of the camera so you can add a battery to get local back up power if the power supply gets accidentally disconnected during a critical live broadcast. The power input is located on the expansion port so you can simply connect power to the breakout cable or you can make a custom cable so you can have multiple camera connections over longer distances and all down a single cable loom.

The built-in row of buttons along the front of the camera gives you quick and easy access to power, menu navigation, and settings. Because they’re on the front, the buttons are always accessible, even when rigged into tight locations. Simply plug into any HDMI display such as a TV or the portable Blackmagic Video Assist, so you can see the camera’s menus, and you can easily change any of the camera’s settings. You can use the menus to set the camera up and then that allows the switcher to take control of the camera via the SDI program input. 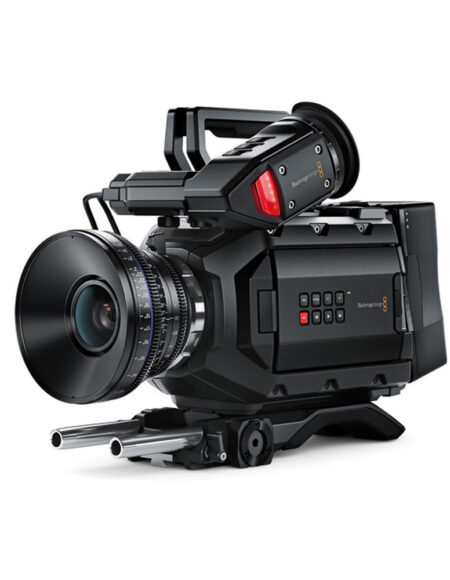 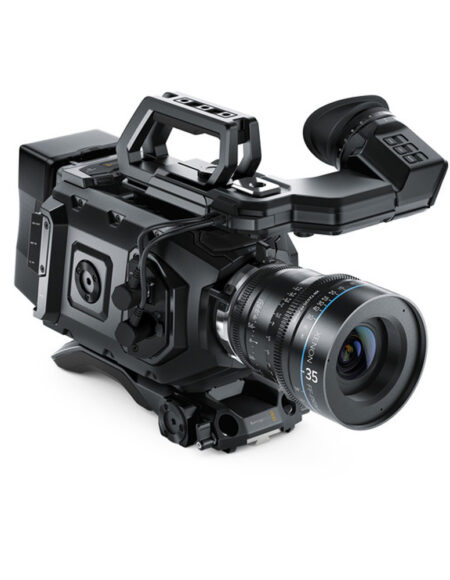 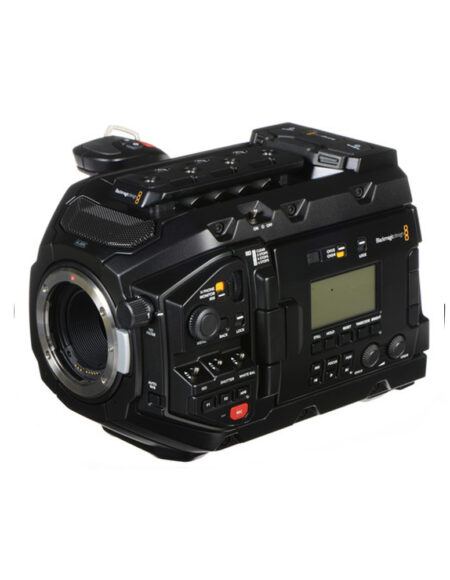 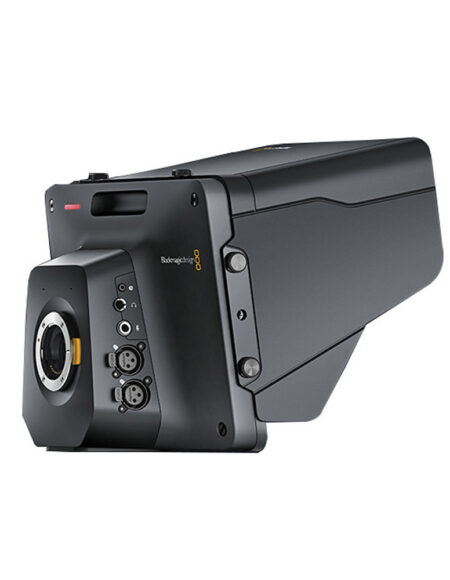 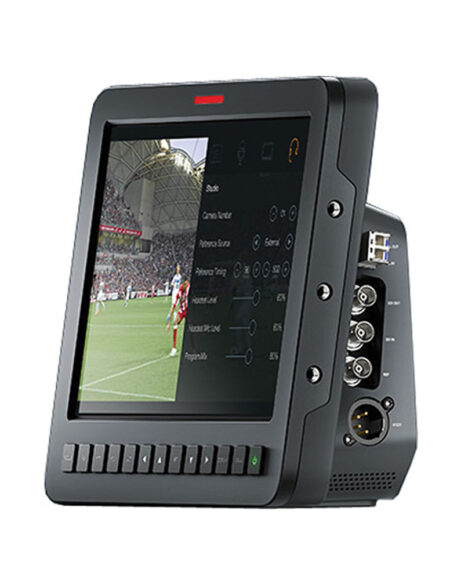 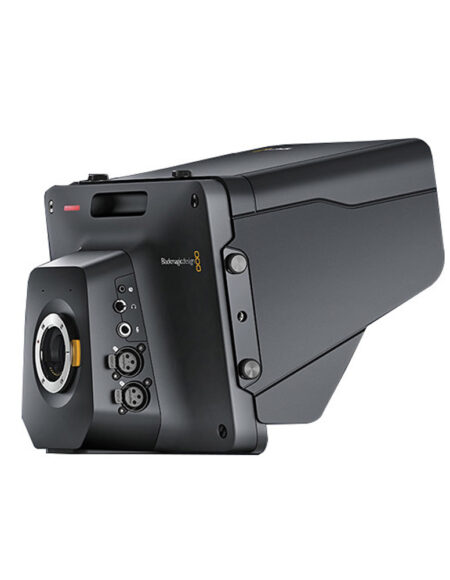 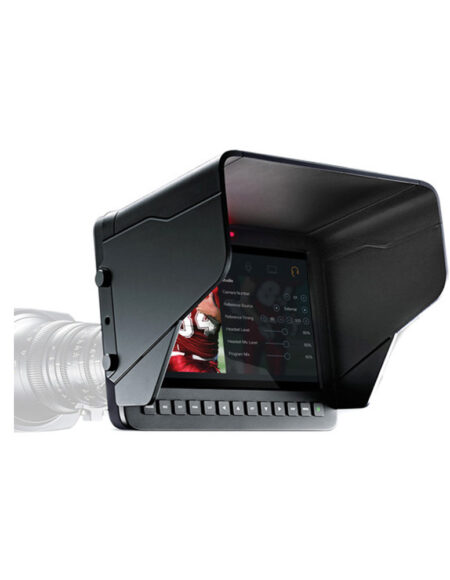