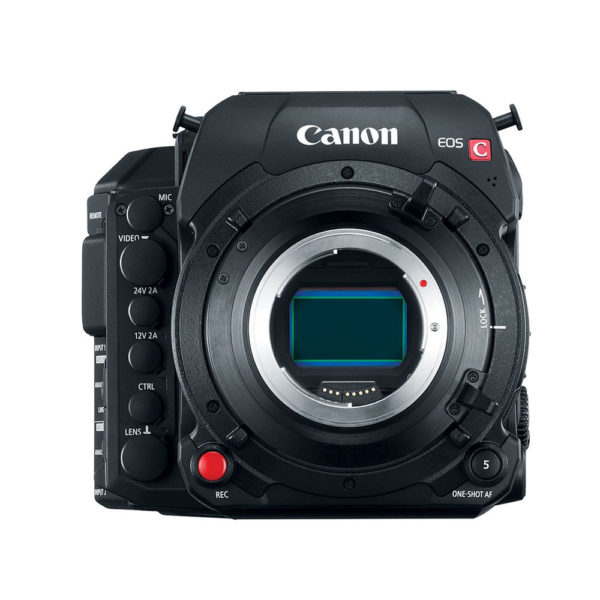 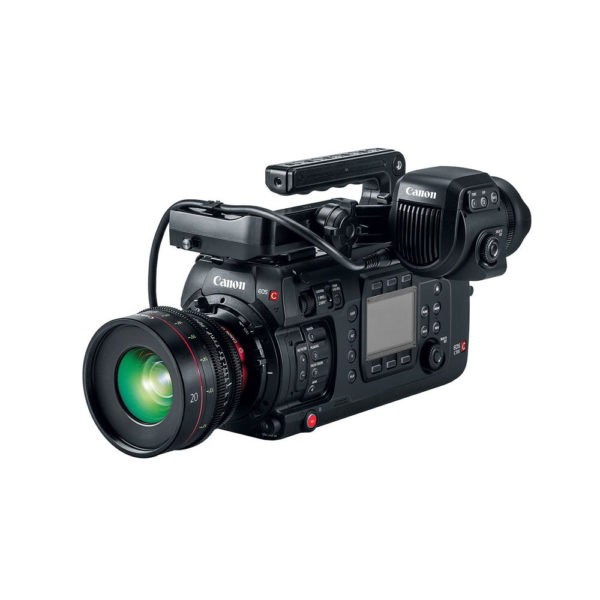 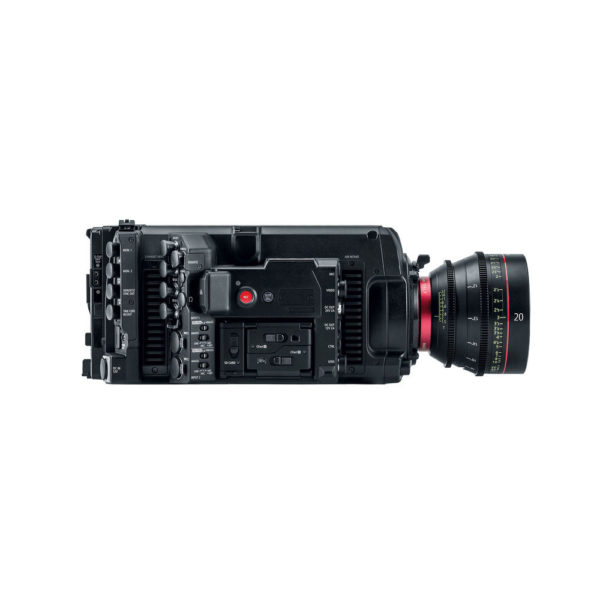 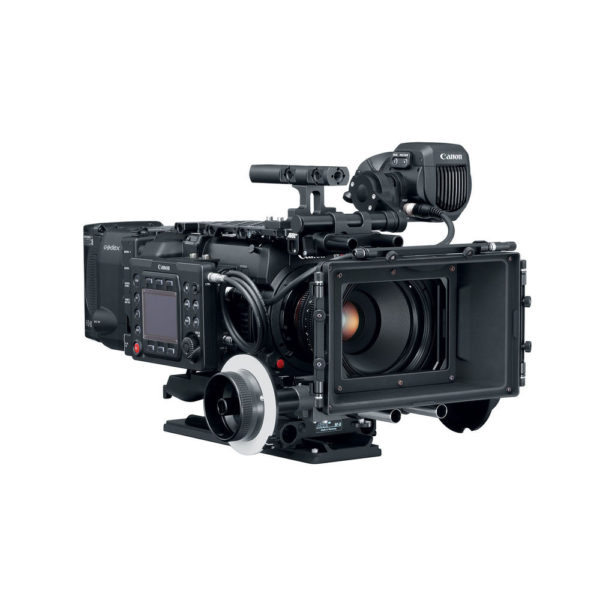 This Canon EOS C700 Full-Frame Cinema Camera features a full-frame sensor that allows you to capture images with up to 5.9K resolution. This version of the EOS C700 FF Digital Cinema Camera comes with Canon’s EF lens mount with a positive-locking mechanism, minimizing play found in traditional spring-loaded, bayonet-style mounts. With a physical resolution exceeding that of DCI 4K and a dynamic range of approximately 15 stops, the EOS C700 FF Digital Cinema Camera is ready for today’s 4K and HDR productions. The full-frame sensor and triple DIGIC DV 5 image processors enables full-frame capture at 30p and 4K cropped capture at up to 72 fps to the CFast 2.0 card slots using the XF-AVC codec. Both relay and simultaneous recording is possible, and you can even record in ProRes on one CFast card, while simultaneously recording to XF-AVC on another CFast card. Raw recording is also possible in full-frame at up to 60 fps, 4K Super35 crop up to 72 fps, and 2K Super16 crop up to 168 fps using an optional clip-on Codex Digital Recorder.

While the EOS C700 FF Digital Cinema Camera is a fairly advanced piece of equipment, Canon has implemented a familiar user interface. Most basic functions can be accessed through the six buttons surrounding the screen. More advanced settings can be found using the simple selection dial and set buttons. I/O options for nearly any application can be found on the camera’s side panel. Video, audio, control, and power inputs and outputs are available for implementations ranging from ENG-style run-and-gun to high-budget cinema productions. The camera supports ACES, and features selectable gamma and log shooting modes. While the camera is a production powerhouse all on its own, its modular design lets the user customize the form factor to fit their use case. The rectangular body has enough real estate to be shoulder-mounted for handheld shooting or secured to a dovetail on professional grip equipment with ease.

Slow down the action with high frame rates. Crop in on the sensor for 2K frame rates up to 168 fps. With the separately available Codex Digital raw recorder, frame rates of up to 60 fps full-frame can be captured using the entire sensor in Raw.

The inclusion of Apple’s ProRes codec inside the EOS C700 FF Digital Cinema Camera enables shooters who require a quick turnaround to go direct-to-edit on many NLEs without any transcoding necessary. In 4K, the 422 HQ flavor is implemented and is supported up to 30 fps. In 2K mode, 10-bit 422, 10-bit 422 HQ, and 12-bit 4444 can be used. High frame rate recording is supported up to 168 fps using the 10-bit 422 flavor combined with the 2K center crop. All formats are conveniently recorded directly to the CFast 2.0 cards.

The EOS C700 FF Digital Cinema Camera features the option to output HDR formats conforming to ITU-R BT.2100 over the monitor input, to assist in HDR production. ITU-R BT.2100 allows compatible monitors to simulate the HDR look of the final piece allowing for easier lighting and other technical decisions on set during the acquisition process.

The EOS C700 FF Digital Cinema Camera supports User LUTs. Users can customize their own LUTs and load them on the camera for viewing and recording.

The viewfinder and monitoring outputs display a translucent area around the image that is being recorded. Having that area lets the operator see what’s happening outside the recorded frame.

The EOS C700 FF Digital Cinema Camera supports ACES 1.0 of the Academy Color Encoding System. Using Canon supplied IDTs, images captured on the EOS C700 FF can be imported directly into the ACES compatible systems. Additionally, video output from the camera can be monitored by selecting the ACES Proxy. Aces Proxy allows the camera to send a monitor output that simulates ACES space to a compatible monitor or device. Modifications made using the proxy output can be saved and later brought into the editing or grading suite to help insure changes and color choices made on set are accurately reproduced in post.

Anamorphic lenses enable one-of-a-kind visual expression and are supported on the C700. When outputted to EVF or monitor outputs, the image is stretched to 2.39:1 after de-squeezing. Magnification factor can be set to OFF/2x/1.33x to match the anamorphic optics in use.

Canon Log 2 emphasizes post-production grading, and maintains higher tonality in dark areas compared to the original Canon Log. With this curve, up to 15 stops of dynamic range can be realized in a single frame.

Canon Log 3 uses a gamma designed to simplify grading by tightening dark areas and adjusting gradation, making it a gamma that makes noise less noticeable and widens dynamic range while retaining Canon Log’s ease of use.

With phase-detection pixels covering 80% of the sensor area, quickly achieving accurate focus with compatible EF lenses is as simple as selecting an area and have the camera automatically focus on it. Face detection will lock the focus on a face inside the frame and track it as it moves through the frame. Different faces inside the frame are selectable. To ensure that focus is smooth, sensitivity can be adjusted in the menu.

Another function of Dual Pixel AF is Dual Pixel Focus Guide, especially for manual focus confirmation. Select an area inside the frame and the UI will show if the lens is front or back focused from that point. Once critical focus is achieved the area will confirm immediately.

A 12-pin lens connection enables remote control of a compatible lens’s focus, zoom, and iris functions, similar to that of a broadcast lens.

With the separately available B4 lens mount adapter, traditional 2/3″ ENG lenses can be used in run-and-gun situations as they cover a large zoom range while remaining relatively compact.

In addition to several assignable buttons, six soft keys surround the control screen on the operator side of the camera. Each of the six buttons can be set to adjust a different camera setting easily and intuitively. This menu system can be driven independently of the EVF menu. Deeper settings can be accessed using the dial, set key, as well as familiar home and back buttons.

IP streaming support lets users stream video online in real-time as they shoot. The C700 can connect with compatible IP decoders, IP streaming software and other devices, either through the on-board Ethernet connection or with a separately available Wi-Fi adapter, to enable live streaming to video websites or news programs within an existing video production and editing workflow, such as at a broadcast station. 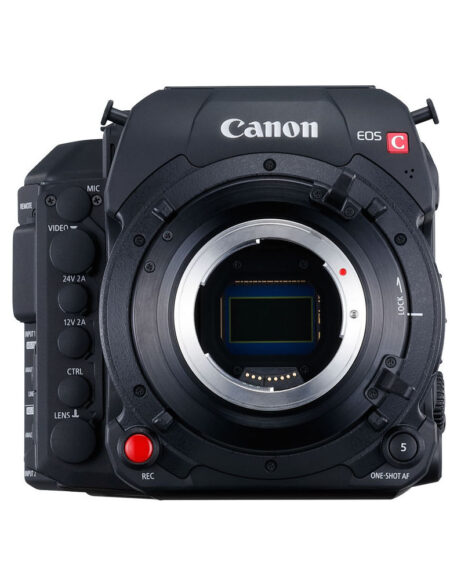 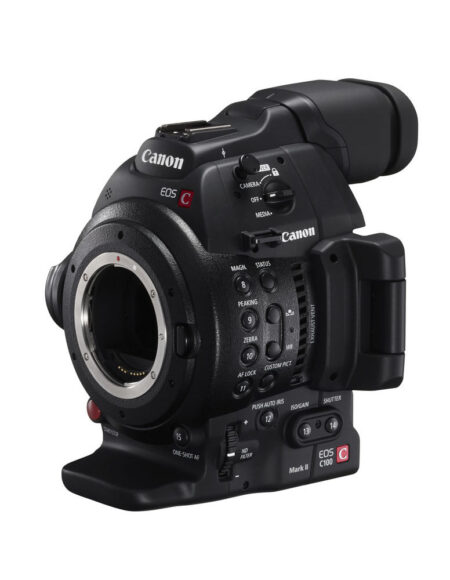 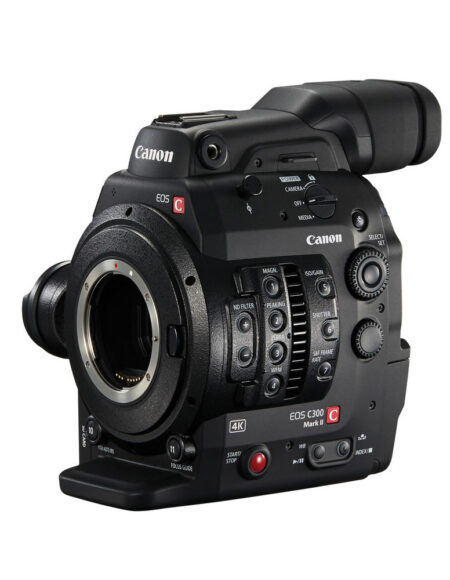